As a teenager I was in to anything creative that I could get my hands on. From experimenting with my dad’s standard 8mm camera to acting in and writing for youth theatre – two of my plays were produced when I was 18 – plus I was playing drums in a band.

My ambition was to go to Film School. My driving force though was to leave home. And the quickest route out of rural Hampshire was Drama School. Initially on a Stage Management Course but I was persuaded to sign up to the 3 year Acting Diploma. 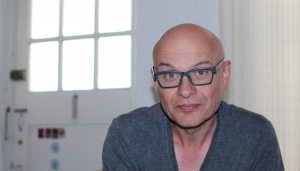 I left Drama School in 1987 and appeared in Casualty, The Bill, Kavanagh QC, a sit-com called The Upper Hand plus a feature film, Underground. Theatre work included The Young Vic, The Civic Theatre Belfast and numerous London Fringe Venues. I was an ok actor and have a pile of glowing reviews, but as the years went on I found myself moving sideways and getting involved in writing again. I wrote ‘Hummingbird in Flight’ in 1994 and then ‘Bioluminescence on the 22nd Floor’ the following year. Then, professionally I started off with a few monologues in some experimental devised work at The Young Vic and The London New Play Festival, then some co-writing credits and finally actual commissions. These included from Louder Than Words (Dream Time),  The Arts Council of Great Britain (Home Movies), Immediate Theatre (Night Colours),and The Australian Playwrights Guild (My Life Is A Theme Tune). Plus a residency at The Gateway Theatre, in Chester. It was during this period that I started collaborating with my long time friend Tim Newton (check out his website www.citizens-band.net). We wrote a couple of short films – Mr Trout and our classic super 16mm release Easy Target, which was sold to Virgin in 1999.

In 2000 we set up a video company – Quark TV LTD. We jumped on the digital bandwagon, producing low-cost videos, online content and DVD’s for the corporate and community sector. Clients included BT, The London Fire Brigade, The Mayor of London, The Metropolitan Police, Immediate Theatre, Dartington College, Pop-Up Theatre, Southwark Council and The London Borough of Hackney.

Quark TV wound down in late 2004. However I continued to work as a freelancer in London under the banner of Full Fat Films Ltd, working for The Institute of Education, The Paul Hamlyn Foundation, Openplay Ltd., The YMCA, Musical Futures, Create London and Haringey Council.

In 2006 I moved to Bristol and continue working under the name of nicksuttonfilms concentrating on video editing in FCP and Premiere Pro, which I now teach at The University of the West of England, as well as directing and producing videos for a number of regular clients.